The TO&E of a Cavalry Troop in the 1960’s called for three platoons.  Each platoon had a platoon leader’s vehicle, a scout section of two scout squads with each squad having two vehicles (4 vehicles in the section) a tank section of three tanks, an infantry squad and a mortar squad.

Many Cavalry units reorganized the platoons to have 9 M-113s when they deployed to RVN – 11th Cav is the best example.  However A/4-12 kept its original organization when it deployed to RVN with one small exception.  There was never enough infantry replacement so the infantry squad was folded into the scout section and most of the time the mortar squads were pulled from the platoons and formed a mortar platoon.

A platoon’s organization would have been (using 1st platoon as an example)
10 – Platoon Leader
11 – Scout Section Leader
12 – Scout
13 – Scout Squad Leader
14 – Scout
15 – Infantry Squad – not used as a scout
16 – Platoon Sergeant and Tank Section Leader
17 – Tank
18 – Tank
19 Mortar Squad, but removed and grouped with the other mortars to form a mortar platoon under Troop Commander’s control.

There were three platoons.  In addition there were two radar tracks, (Call signs 61 & 62) the troop commander’s track, a light recovery vehicle and the commo track (Call sign 30) that is why the 3d Platoon Leader’s call sign was 40.
Matt Spruill. This is the second installment to my e-mail on Troop organization.

As I mentioned before each platoon had a mortar squad, they were 81″MM mortars mounted in a track.  Common practice was for all three mortars to be grouped into a platoon.  When I was there the “19” Squad leader ran the mortar platoon.  The mortars went to the field whenever the entire troop deployed.  In night defensive positions they were located in the center of the troop position and were aimed at a pre-determined target.  They also had registered data for other likely targets.

The troops had two Ground Surveillance Radars (GSR).  They were AN/PPS-5, and used call sign 61 and 62.  Each radar had a track and a crew of 2 or 3.  The radars looked like a large can turned on its side with the radar end being curved and the operators end being flat.  This was mounted on a tripod and could be hooked up to a small generator for power. 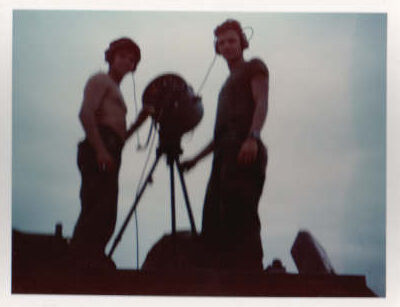 The radar was designed to pick up movement and worked best against vehicles, but it could pick up groups of people.  There was no scope like you see on most radar, but the radar return came through an noise which the operator heard in a set of head phones.  It required training and practice to use the set with any reliability.

The radar also went to the field when the troop deployed and at night was located in the center of the troop’s position.

When I was there I had the mortars and the radar set up on the same base azimuth.  That way when ever the radar picked up a target they only had to give the mortars the azimuth and range for the mortars to fire, it took some practice but several times suspected targets were engaged.

As each mortar track and radar track had a 50 cal mounted on top they also provided a nice firepower reserve for direct fire in a defensive position if needed.

When on the move the radar tracks accompanied and set up with the mortars to provide them security.

Is anyone out there a mortar man or a GSR operator?
Matt Spruill

Matt, I was the gunner on 29. MOS was 11C20. I was trained as a mortar man at Fort Ord. During the time that I was over there, I only remember a few times that we set up as a company and used aiming stakes and the M16 plotting board. It seems that most of the time we were at platoon strength and usually just “hip shot” the mortars. I don’t remember the radar tracks very well. The tank’s range finders were used to give us an accurate distance to target and we would use the vertical cross hair for alignment and adjust range accordingly. Much of the time that I was there, Jun 69 to Jun70, track 29 wasn’t running so I spent time as M60 gunner on different tracks. I can remember one time that we had the three mortars tracks set up on coordinates and we had some Marines working with us. They had electronic listening devices set up on a trail in three different spots. Movement was detected on the first, the second and when we got the ok, we fired 5 rounds from each tube and blew up the third sensor. In the morning we found a bloody shirt.
Bob Taylor

Glad to see that troop tactics changed some time after I was there.  Don’t remember ever seeing a radar track and to the best of my knowledge never used the mortar track other than as another vehicle with a 50 on it.  I never remember them set up as a battery but then we were usually operating as independent platoon and not that often as a troop.  The one time we could have dropped a few rounds in to keep them hopping it was decided that the men didn’t have the experience to register accurately enough, especially when friendlies were also operating in the same valley and positions iffy.
William McShane