Thanksgiving is at Cua Viet: “We went into the Navy mess hall and got our chow, I remember paper plates, rain, and not much food was left for us. I clearly remember Big Daddy bitching and moaning about the little bit of food that was left. About a half hour later they picked a group of guys to go across the river, when the landing craft opened the front door to let us out I jumped out and landed in water up to my neck. We hiked up to a cemetery and set up an ambush site in the middle of a bunch of graves, one was open and Big Daddy and I decided that was our foxhole.”
(W. Mendoza)

The picture was taken on the evening of Thanksgiving Day, November 1969 on the Cua Viet River. We’re going out on an ambush patrol after eating a turkey dinner. We’re stuffed. Coop is leading us out. I strongly remember everyone except for that guy kneeling in front of me. It drives me crazy that I can’t remember his name. It’s like he came out of nowhere. Mike Davis has a similar picture and he labeled the guy the “new medic.” His eyes are in shadow. Pineapple 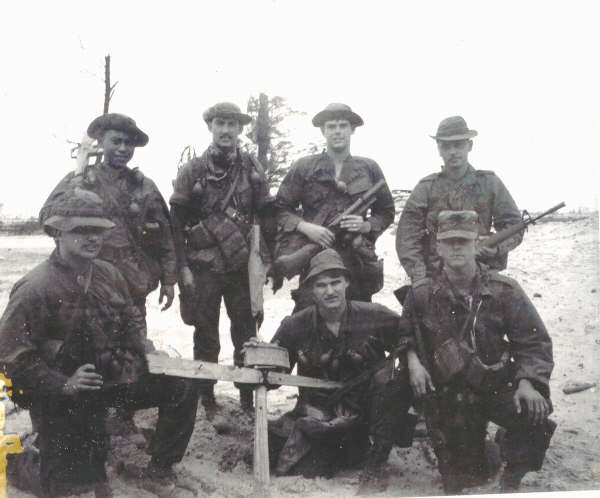 I left Quang Tri on Thanksgiving Day 1970 to come home. We were to go to CanRanh Bay. Like most guys, we got orders to go home, but not given a way to get there. Jerry Beverage and I bummed a ride on a C 130 to Da Nang, hoping to find another flight to Cam Ranh from there, but no flights were leaving in the forseeable future. The Air Force ran the club at Da Nang and wouldn’t let us in, because it was their Thanksgiving celebration. ( I always thought they were a bunch of pansy as &*%$*&%$). Somehow, we found our way to a French restaurant just outside the base. We celebrated with another guy over some wine. We truly had something to be thankful for, we were on our way home. When we returned to the airport, it was deserted and dark, but we found a cargo flight going to Cam Ranh Bay. There were no seats, just cargo, us, and four or five Vietnamese that looked like farmers and probably had no business in the plane. We flew through the worst storm I’ve ever flown through. The plane even leaked. I think we landed about 2:00 a.m.
John Sharpe

The National Archives has 2 documents relating to a gift of foodstuffs that arrived at A 4/12 Cav HQ on November 27, 1968. They were a Christmas gift from Brownie Troop 198 of Pueblo, Colorado.
Captain Kennth G. Carlson, C.O. of A Troop, declared the Brownie Troop honorary members of our unit..

In November 2004, Captain Carlson wrote a letter to the editor of the PuebloCheiftan newspaper about the Brownie Troop.

My most memorable Christmas in Vietnam was Christmas Eve, 1968.  A Troop, or at least most of it, was working on the road over the mountains and into the BaLong Valley.  We had an engineer unit and an artillery battery attached to us, making us almost a battalion sized outfit.  1st Brigade had decided that our little operation was large enough to call our headquarters “LZ Carlson.” Coming out of LZ Sharon to the Southwest, we followed the Thach Han River until we came to a small stream called  Khe Trai.  There, the engineers built a pontoon bridge and we set up HQs across the stream towards the hills where we intended to build the road. (YD265440, for those who want to check the map.) We had been there for at least two weeks when Christmas Eve arrived.  Earlier in the day, a monsoon had hit us and we lost a 2 1/2 ton truck which slid over the side of the road we were building.  I had to declare it a combat loss because there was no way to pull it back up the steep cliff.  We blew it in place. Our biggest problem was that the monsoon had turned the small stream into a raging torrent, and the pontoon bridge was washed away downstream.  We were on the wrong side of the stream, stuck in “Injun Country” until a new bridge could be put in. On Christmas Eve, COL Frank Borman and the crew of Apollo 8 were making mankind’s first trip around the Moon.  As the officers and I sat in A1A, my track, soaking wet and trying figure out what we were going to do, we listened on one of the LT’s transistor radio as Apollo 8 saw it’s first “Earthrise.” From 70 miles above the surface of the Moon, Astronauts Borman, Lovell and Anders took turns reading the first ten verses from the Book of Genesis, the story of Creation.  They ended at Verse 10: “And God called the dry land Earth; and the gathering together of the waters called He Seas: and God saw that it was good.”  And as the spacecraft began to disappear again into the silence behind the Moon, COL Borman paused and said,  “God bless all of you on the good Earth.” I looked around the cramped space of the track.  All of the officers had tears in their eyes, me included.  Just then, PSG Jim Platt opened the back of the ACAV and looked in at the scene.  I don’t know what went through his mind as he saw all of his officers crying, but I recall he reached in his pack and pulled out a small bottle of scotch. “Here — you guys need this more than I do.”  Then he closed the ACAV door and left. Next day, Christmas 1968, was the only time in my 26 year military career when my unit did not receive Christmas dinner in the field.  The rain and wind was just too severe to fly out our meal.  But when we returned to LZ Sharon some 6-7 days later, our cooks had Christmas dinner waiting for us. The road into the Ba Long Valley was never finished on my watch, but it wasn’t for lack of effort on the part of A Troop.  We went places and did things, others wouldn’t even consider.  You guys were superb. May you all have a Merry Christmas and Joyous New Year. Ken Carlson A Troop Commander 1968-69